skip to main | skip to sidebar

So the day was Thursday, July 9. That morning, the future mister and my dad left to play golf while Mom and I went about our day - I was working from home at the time. Sometime in the afternoon my dad called my mom and told her that they were going to grab a drink from one of the bars downtown because the club at the golf course didn't have a bar. Nothing out of the ordinary - they usually enjoy a glass of bourbon when they're together. He said they'd be home for dinner - which was my dad's wonderful, homemade chili. When they got home, my dad suggested we all take a ride to the botanical gardens after dinner to walk around. Despite only being in town for a few weeks, it was already one of our favorite places, and actually the place we were visiting when we made the decision to move from Kentucky to Georgia (*very important tidbit). I thought it was a great idea, of course.

So we got there and my parents quickly found some reason to split off from us. Now we're alone. The future mister turned to me and said, "I love you." Now, I probably should have caught on at this point, but I'm obviously dense. Why? Because 1. He never randomly says "I love you" and 2. It was in the weirdest tone of voice I have ever heard come out of his mouth. Anyway, we ended up under this pergola covered with beautiful wisteria vines. He told me that he and my dad were talking about me while golfing. I asked what they were talking about, but he wouldn't say. Then a bunch of kids showed up riding their bikes and I announced that we should find mom and dad. Poor guy - attempt number 1 turned into a big fat fail. I was not the easiest girl to propose to.

We found my parents and walked around some more until they wandered off again. At the point when we were nearing the bench where we made the decision to move to this town the future mister grabbed my hand and said, "let's go to our bench." On the way, he started talking. He said "I love you" again, in the same weird tone of voice. We got to the bench and I proclaimed that it was dirty (lucky for him since I wasn't supposed to sit anyway), so he told me to just stand. More beautiful words followed, most of which I cannot remember. Something about me moving twice to be with him, starting a new chapter of our lives together, wanting to be with me forever... I'm told that during all this I asked "are you serious?" at least twice. I finally realized what was happening and the tears began to fill my eyes. I remember nodding yes over and over again as he got down on one knee, before he even asked, and then of course saying yes, once he did. Then he took the ring out, and never having been engaged before, I tried to grab it out of his fingers to get a closer look. Oops, I guess I'm supposed to wait until it's actually on my finger first!

So that's the story. It was meaningful and just perfect. Mom and dad were thrilled (and honored to be included) and we celebrated with champagne later that evening. 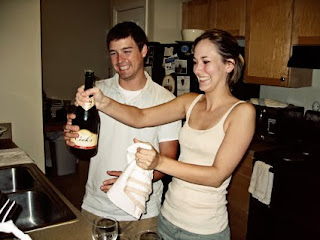 Was anyone else out there difficult to propose to?
Posted by Heather at 6:09 PM

Heather
I'm a northern girl marrying a southern boy. Together (well, mostly me) we'll be planning the wedding of our dreams.